Have you ever wondered just what is involved with planning a Mardi Gras parade? I know I have. We take our family to parades in Baton Rouge and New Orleans during Carnival Season. I’ve had friends ride on floats and I’ve even been inside the Rex Den, but I never actually thought about how much those plastic little beads really cost.

Many months ago, I was invited to see what is involved in the planning of a Mardi Gras Parade. I was sworn in as a member of Baton Rouge’s all female krewe – The Krewe of Artemis. I was nervous as I went to my first meeting, held at Embassy Suites in Baton Rouge. I walked in to see groups of women sitting at large round tables, with each small group wearing similar shirts or even things such as pig noses or glittery crowns. The groups were actually members of each float that will be in the parade. The meeting took place at the end of summer, but the ladies were already getting into the Carnival spirit.

I located my friends and joined them at our table to meet some of the other ladies on our float. Nearby was a bar serving wine and a display of the bead selection available to purchase as ‘throws’. The meeting soon began and the parade theme was announced, along with float assignments. A discussion included costumes, fittings, bead order forms, the soiree, afterparty, and lots of other events. I felt as if I had entered into a secret society of really cool wine-loving, party-throwing women.

Our float was announced and we groaned just a little (The Old Woman Who Lived in a Shoe) but then decided we would all wear fashionable funky footwear. The meeting soon disbanded and then the fun REALLY began. In November was a wine party, December was our float Christmas Party (with lovely wine and eats at Enoteca Marcello’s Wine Bar) and then in January we had the Soiree.

A soiree or ball is held by each Mardi Gras Krewe and the dress is floor length gowns and tuxedos. The krewe royalty is introduced, including float lieutenants. It’s a fun party and my son asked my husband and I if we were going to a prom for old people. I sure didn’t feel old! It was fun to get decked out and spend an evening in downtown Baton Rouge. We stayed at the Hilton Capitol Center, an historic hotel near the soiree.

Tonight is the Krewe of Artemis Parade in Downtown Baton Rouge and my friend and fellow traveling mama ThemeParkMom is flying here to ride on the float with me. We’re going to have a mini girlfriend getaway as I show her all about my city and our culture. The parade rolls at 7pm and the weather is supposed to be clear and cool. If you are on Twitter, you can follow our adventure by following the hashtag #Artemis, or you can click on this twitter search link. The parade route can be downloaded at the Official Krewe of Artemis website.

And now for the cost. Annual dues vary for different krewes, but for this particular krewe, this is how much it costs to throw those little plastic beads to the crowd:

Initiation Fee and Annual Dues: $550 (Sponsored by VisitBatonRouge.com) Inlcudes float rentals, costumes, etc
Soiree: 2 Tickets included with dues, but extra tickets are $70/person.
Food at Soiree: $20/person for our float group
Beads: $344 for my order
Float Expenses: $45 for live band and snacks before and after.

I hope that if you are in the area this evening that you’ll join in the family fun and festivities. I promise to throw you some beads, just be sure to holler, “Throw me something, Sistah!”

Send your own ElfYourself eCards

My friend and fellow Gadling contributor Heather Poole has posted a great video for all you moms out there getting ready to take young children to the airport this holiday season. In the video, a very cute 4-year-old boy discusses his experiences with airport security in the “Fifty-hundred” times he has been to the airport….

Affordable hotels and great travel deals aren’t too hard to find around the theme park areas of Florida. One destination that gets overlooked is Kissimmee, which practically borders Disney property. We’ve put together a list of lodging alternatives that are similar to many Disney resorts, yet the price is just right! Instead of Disney’s Grand…

Summer in the US is the time where most families head to the beach. These are my picks for the 2008 beach season. This list is based on personal experience, family friendly offerings, sand quality, and overall good times. Feel free to comment on the destinations included or add your own picks for Gulf Coast… 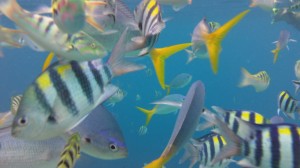 So many families these days make going green a priority. If yours is among them, the beautiful island nation of Palau is an off-the-beaten-path water wonderland – where conservation tops the list of priorities. Take the coral reefs, for example.  With rare foresight, the people of Palau decided many years ago to preserve their reefs, prohibiting fishing and speedboats in…