The Carnival Season is a time of fun and revelry. Most people associate Mardi Gras with New Orleans, but did you know that the first Mardi Gras in the US was held in Mobile, Alabama? There are also Mardi Gras parades held all over the southern US and in a few other places around the country, including my home city of Baton Rouge, LA.

The only time I’ve missed Mardi Gras was the year my daughter was born — on Mardi Gras Weekend! She was a preemie born the Sunday before Mardi Gras proper, but we still wore our beads in the NICU that year. I’ve even turned down trips to Europe and exotic islands because they happened to fall during Mardi Gras. After all, it is a state holiday here in Louisiana.

The Carnival Season begins Twelfth Night, January 6th of each year and goes through midnight until Ash Wednesday. The two days preceding Ash Wednesday are Lundi Gras (Fat Monday) and Mardi Gras (Fat Tuesday). The entire season is sometimes referred to Mardi Gras or Carnival. It is a religious based event that had become a cultural experience of a region.

Not everyone can get to a Mardi Gras parade this year, but if you are of a mind to take a trip, there are a number of family friendly celebrations along the Gulf Coast states. And yes, I DO BRING MY CHILDREN TO NEW ORLEANS FOR MARDI GRAS sometimes. We however, do not bring them to Bourbon Street. Ever.

How to Celebrate Mard Gras and the Carnival Season

King Cake – Carnival Season begins on January 6 of each year. You can order a King Cake online and have it delivered to your home. This can be expensive because it must be sent overnight or it isn’t fresh. For those one a budget, I have an Easy King Cake Recipe on my personal blog. One of the fun parts of a King Cake (besides indulging your sweet tooth) is finding the baby inside. Tradition says that whoever finds the baby will have good luck all year. Here in Louisiana, in an office setting, it means you have to buy the next King Cake for the office. Lucky you. Last year I had a blast judging a King Cake contest in Baton Rouge.

Decorations – Many people in Louisiana keep their Christmas trees standing through Carnival Season and decorate it in Mardi Gras colors of purple, gold, and green. Fireplace mantles and front doors also bear decorations of ribbons, masks, and shiny things to celebrate. Go to a local craft store and make a Mardi Gras wreath for your front door.

Music – Jazz things up with some Mardi Gras music around your home or office. Mardi Gras Mambo is always a popular choice and will guarantee to have your office dancing a Second Line around the desks. Basin Street Records is one of my  favorite labels for New Orleans music.

Have Your Own Parade – Liven things up in your neighborhood or workplace my holding an impromptu parade. While Macy’s Thanksgiving Day Parade and the Rose Bowl Parade are popular for their balloons and flowery floats, I think they’re kind of boring. For an authentic Mardi Gras experience, you have to have Throws. Throws consist of beads, promotional items, flowers, and candy. Here in Louisiana, the Zulu Social Club gives throws of the highly sought after golden coconut. In earlier times, Mardi Gras was when the wealthy shared with the community, giving back in the form of these throws. Mardi Gras Krewes are social clubs who give back to their local society throughout the year and also have private social gatherings. Read: Those plastic beads aren’t cheap.

Hold a Mardi Gras Party – Mardi Gras Krewes hold a soiree each year to present their royal courts. Traditionally these soirees, or balls are extremely formal with men in tuxedos and women wearing floor length evening gowns. The Krewe I’ve been a part of is Krewe of Artemis in Baton Rouge, Louisiana. For the annual soiree, all gown hemlines must touch the ground or you will not be allowed into the party. Mr. Kevin Kelly, owner of Houmas House Plantation holds a masquerade party annually during Carnival Season at his private home along an iconic New Orleans parade route. This is one of the most exclusive private events in the entire world.

Make a Gumbo – In Mamou, Louisiana there is the Courier de Mardi Gras tradition. Costumed riders go around the area by horseback through the rice fields of Evangeline Parish collecting the ingredients for a community gumbo. Live chickens offered up by homeowners are chased and sometimes caught for the gumbo pot. You don’t have to chase chickens in your neighborhood, or even clean a chicken with my Easy Chicken and Sausage Gumbo recipe.

These are just a few of the ways to celebrate Mardi Gras where you live. Be creative and have fun!

Do you have any projects or traditions for Carnival Season? Laissez les bon temps roulet!

Cherries hold a special place in my heart. My summers as a kid included afternoons of relaxing around my grandmother’s home in Alabama and snacking on fresh cherries with my aunt who’s only a few years older than me. I can’t forget about all those desserts that are topped with cherries. As I grew older,…

Right now my new husband and I are on our #EpicHoneymoon adventure on Qatar Airways. You can follow along via social media on Instagram and Twitter to see just where we end up and the romantic things we discover along the way. Also, to celebrate the new Qatar Airways route from Dallas to Doha, Qatar…

Today in New York City at The Terrace, Carnival Cruise Lines held a press conference announcing enhancements to the Fun Ship fleet. CEO Gerry Cahill announced a $500 million initiative that will roll out over the next four years. I personally got so excited, I almost needed to break out a paper bag to breathe… 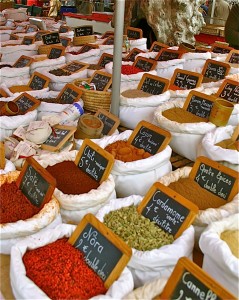 One Saturday morning, while I was in Saint-Tropez, I ventured for a stoll to the central market. This area is called the Place des Lices and can be a busy area in the summer. I went in search of people watching, specifically the old men playing boules. Instead I discovered the Saturday Market, the place…

Last night I enjoyed dinner at a premium restaurant on the Carnival Liberty. I’ve been on board checking out all the Fun Ship 2.0 enhancements. Dinner at Harry’s is $30 per person, but if you look at some of these images, you might agree it’s well worth the added expense. Amuse Bouche (Sent by the…